Blue Horse Mukwa was founded when Gitchie came to live with us in Virginia Beach. He had been a Caisson at Arlington National Cemetery and was in need of a buddy. We saw a great need in the equine world to take in horses that otherwise may have met a horrible end and the rest is history. Blue Horse Mukwa has grown since then and we now provide loving, forever homes to over forty horses. Our horse family includes every "kind" of horse imaginable, from the backyard pony to former thoroughbred race horses that were either injured on the track or did not have profitable careers (some have famous bloodlines like Man O’ War, Seattle Slew, and Secretariat). We also provide sanctuary to mules!

Each horse that arrives at Blue Horse Mukwa has a different story, but they all have one thing in common: They gave their all to a human being, and once they were no longer useful, were injured, or were an inconvenience, they were cast aside. Some of our horses were abused, some were abandoned, and some were starved ... but all of our horses had their hearts and spirits broken by people who were supposed to love them and care for them. Our mission is to end their suffering, both physical and mental, and make sure they have a loving home for the rest of their lives.

When a new horse arrives at Blue Horse it is usually frightened and confused. It has been moved to a strange place with unfamiliar horses, and has to not only become familiar with a new way of life, but also establish its place in the Blue Horse herd. Our staff works hard to earn the trust of each new horse and welcome it into its new life at Blue Horse Mukwa. After a few days, it's wonderful to see horses that have come from such terrible circumstances come to life when they realize that there will always be food to eat, water to drink, shelter, and friends to play with.

"I am never going to forget all that this beautiful being brought into my life and the lives of others. Thank you Gitchie for making me listen to you and putting me on this path to help others. I love you Gitchie witchy wawa. Peace. I lost Ogitchieda March 5, 2018. He is gone, but he will never be forgotten."   ~Rabiah Seminole

Gitchie was Rabiah's heart and soul and the heart and soul of Blue Horse Mukwa. Gitchie was a Caisson for 8 years, taking fallen solders to their final resting place, and was also honored by the Spotted Eagle Warrior Society in South Dakota for his service.

Gitchie was the founder of Blue Horse Mukwa Equine Retirement and Rescue Center, and if it had not been for him, Blue Horse would probably never have started. He was the beginning of helping horses in need for Rabiah, and for the past 20 years that Blue Horse has been in existence, he was the boss. He is the reason 100s of horses have been saved and networked.

Because of Gitchie ... by Hannah Carey

Because of Gitchie, Blue Horse was started,

Because of Gitchie, countless horses were given a “second chance” at life,

Because of Gitchie, a horse crazy teenage girl had the chance to discover a haven of acceptance, even when life was challenging,

Because of Gitchie, that girl was able to learn how to have compassion, empathy & respect for horses and for people,

Because of Gitchie, that girl was able to be impacted by “other mothers” in her life that empowered her & taught her,

Because of Gitchie, that girl was able to learn to view horses as living beings instead of objects,

Because of Gitchie, that girl was able to meet her “heart horse”, Mocachee, and eventually was able to call him her own,

Because of Gitchie, that girl was able to have many incredible experiences & adventures with Mocachee while they embarked on their horsemanship journey together,

Because of Gitchie, that girl (now woman) was able to start sharing what she learned with others and found her passion helping people and horses,

Because of Gitchie, that woman had learned from her “other mothers” that being a strong willed women wasn’t a bad thing and because of that she found a man that loved & appreciated that about her,

Because of Gitchie, that woman and her husband (who had also begun to love the horses) purchased their own horse farm, fulfilling her lifelong dream,

Because of Gitchie, two more horses had the chance to come learn a different way of being with humans, as they joined Mocachee and created a small herd of three,

Because of Gitchie, that woman created a program where she was able to educate & empower others, while showing them a different way of being & interacting with their horses,

Because one life can make an impact, like a drop in a pond that creates a multitude of ripples,

Because “that girl” was me. 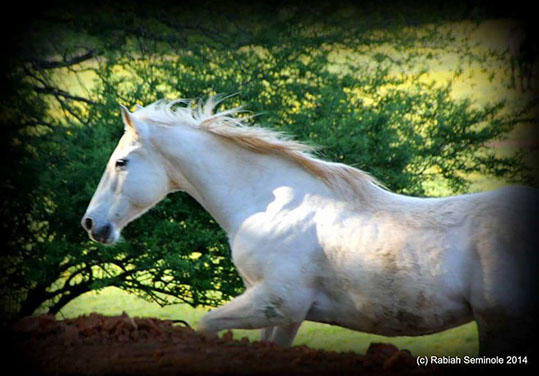 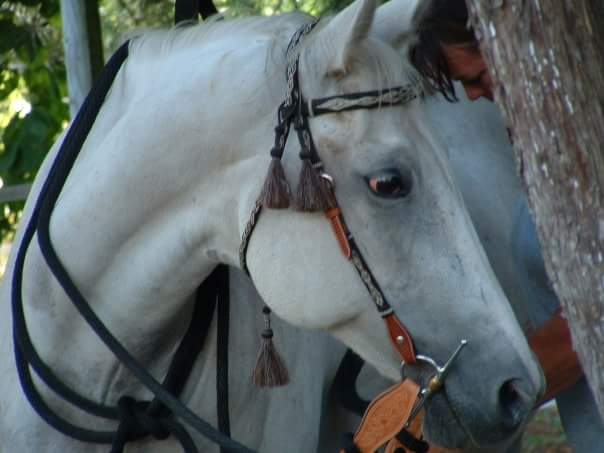 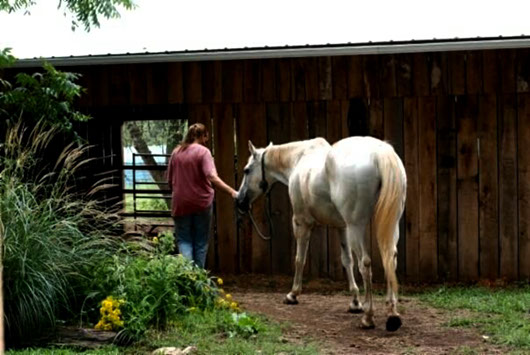 Horses hold a special place in the history Native American Indians and they are not only part of my heritage, but are also part of my heart. I've always been amazed at how horses bring human beings together in so many ways, and how their very presence helps heal us. I have seen a horse help a young person who had suffered from abuse and neglect by a single soft nuzzle.

I was thinking about all the wonderful horses that have suffered at the hands of humans, all the beautiful innocent foals that have been thrown into cruel training and handling practices. Why? Because humans are in a hurry. They want everything now. So instead of trying to build trust and confidence in a horse, they do whatever is needed to get the horse to submit.  At our rescue facility we have every kind of situation. All different forms of abuse and and neglect. The hardest ones to reach though, are the ones that have been so brutalized by a "trainer" that they live in constant fear. They do not trust anyone. Most horses will run from fear, but when a horse has gotten to the point that he does not run and turns to fight, striking out for no reason, biting, charging people and other horses, he is living in constant fear and turmoil ... he becomes dangerous, to himself and anyone that gets close. He has been so brutalized he is in a constant state of fight. It is the saddest thing to witness. This is not the natural way of a horse. They are not born to be mean. They are big gentle creatures that deserve to be treated with honor, dignity and respect. And they want to trust humans. Instead, many "trainers" do whatever they can to "break"  the horse, including hobbling them, throwing a tarp over them, pushing them over and making them lie in the hot sun for hours on end, and even hitting them in the head with a 2x4 to make them submit. I have witnessed a magnificent, beautiful horse put down because of the ruthless practices used on him. He was so scared that he killed another horse and harmed several people that were trying desperately to help him. Nothing worked. Many different good natural horsemanship trainers tried to help and four different vets tried to help, but he had suffered a brain injury from a "trainer" who hit him with a 2x4. I have cried buckets over the abuses I have witnessed, and that is why I do what I do.

I do not profess to have all the answers, but I do know that we all have a responsibility to do what we can for every creature on this earth, including horses. Of course, I love all animals and provide homes to many at Blue Horse Mukwa, but horses have always been the medicine that heals me. Every horse that I have ever met has a beautiful spirit, it is just a matter of letting it shine and seeing it! All you have to do is touch one and look in its eyes and you will know what I'm talking about. The job of rescuing horses breaks my heart, but the Spirit of the Horse heals it.

In the Spirit of the Horses,

Blue Horse Mukwa Equine Retirement and Rescue Center is located in Chase City, Virginia. We are a registered and respected 501(c)(3) non-profit charity that provides lifetime care for unwanted horses.